It is feared that artificial intelligence, which develops rapidly as a result of the studies and continues to gain more place in all areas of our lives with its new abilities, will disable people in almost all professions in the future with the new abilities it will acquire. The aim of this research is to reveal scenarios in which artificial intelligence will take place in education in the light of the same concerns and examine these scenarios in line with expert opinions. In the research, qualitative research method was adopted and the opinions of the participants were analyzed in depth with a phenomenological approach. As a data collection tool, semi-structured interview questions prepared by the researchers were used. The study group of the research consists of 10 academic staff who are experts in the field of artificial intelligence, working at various universities in Turkey, reached by snowball sampling method. The data obtained as a result of the interviews were analyzed by descriptive analysis method. In line with the analysis, the data were gathered under the sub-themes of possible benefits, concerns and applicability related to the scenarios. According to the findings, many benefits will be provided in scenarios where artificial intelligence replaces the teacher and takes the role of principal in school management. According to the findings, these scenarios also raise many concerns. According to another finding of the research, artificial intelligence will not be able to replace the teacher or school principal with its current abilities, and it will be more beneficial for the teacher and the school principal to remain in the role of assistant unless necessary developments are made. 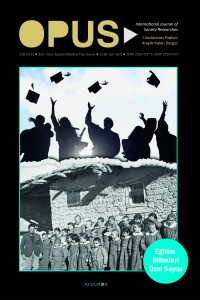