The aim of the study is to reveal the effect of temperature changes in dependent on elevation
on the physico-chemical properties of different soils formed on periglacial landforms located
on the summit plain of the Ilgaz Mountains. For this purpose, the relationship of the elevation
steps of the non sorted step, the stone cluster, the non sorted circle and the thufurs on the
temperature has been evaluated. The elevation range is considered between 1943 m and
2398 m and soil samples have been taken from the periglacial landforms distributed in this
elevation range and soil properties with different temperature changes have been statistically
correlated. In the statistical approach, there is no statistically significant difference between
the elevation and the values of the soils distributed in periglacial landforms related to some
physico-chemical properties (EC: Electrical conductivity, OM: Organic matter, Na+, K+, clay,
sand, HA: Bulk weight, TK: Field capacity, SN: Wilting point, YS: Useful water, DO: Dispersion
ratio, SSI: Structure stability index, KO: Clay ratio and CF: Crust formation). However,
according to the analysis values, although not statistically, it is determined that there is a
significant decrease in elevation increase, especially in OM and clay formation. It can be said
that this situation is caused by a decrease in the geo-physico-chemical reaction, as well as the
bio-chemical reaction. In addition, it is determined that the chemical properties of lime, Ca,
Mg, pH and physical properties of the soils formed in the considered periglacial landforms are
statistically significant in terms of AS (Aggregate stability) and HI (Hydrological conductivity)
values. 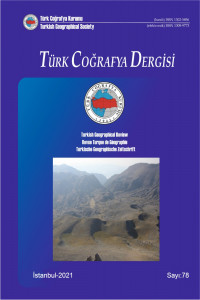