Graffiti as spatial representations of inequality: A study in Balıkesir city

Inequalities become evident in cities as cities are settlements where population diversity. In
unequal conditions, people survive with various tactics in daily life. One of these forms of existence
is the traces that they leave in the city. The most obvious forms of these traces are graffiti,
which is a mean of saying “I’m here”. In this context, graffiti are distinct spatial representations
of inequality. In order to understand the relationship between these representations and
inequality, in this study, graffiti in two relatively rich and poor neighborhoods of the city were
examined. In the selection of the neighborhoods, an examination was made on the rental prices
of the houses and as a result of this examination, Bahçelievler neighborhood and Gümüşçeşme
neighborhood were determined as the study area. It has been understood that graffiti in the
study area are spatial representations of the differences between the two neighborhoods in
terms of the surfaces on which they are applied, their application styles, meaning and content.
The socio-economic differences between the two neighborhoods are effective in spatial
practices. On one hand, the produced space corresponds to the reproduction of lower-class
practices, on the other hand, it has made upper-class practices a part of daily life.

graffiti, inequality, public space, other spaces, the production of space 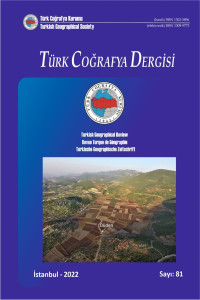