Pontic Sigillata is a group of sigillata widely used in the Black Sea (Pontos Euxeinos) basin between the second half of the 1st century and the 3rd century AD. This group of ceramics, which has a wide variety of forms with different clay and slip properties, is widely seen in Hadrianopolis. The Pontic Sigillatas found in the Square Planned Structure unearthed in Hadrianopolis, one of the important ancient cities of the Western Black Sea Region of Turkey, were evaluated within the scope of the study. By excluding the body of the vessel from the study, 18 pieces of ceramic were focused on and grouped according to form as either plates, mugs, or cups which were then further divided into 8 subcategories. In order to do this, the typological and chronological classifications of J. W. Hayes and D. Zhuravlev were taken into account and pieces were dated with the help of their analogies. The ceramics are dated between the 2nd century AD and the first half of the 3rd century AD and are important as they allow the building which they were located in to be dated and also shed light on the production and distribution of Pontic Sigillata. 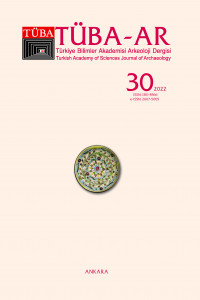