This study links the concepts of morphology and linguistic production. And provides a list of concepts of morphology that should be included in Arabic textbooks at different teaching levels. This list is organized according to the importance level of the concept, its relation to functionality, linguistic production and the abilities and needs of the student or the learner. In this context, 3 series; “el-Lisân, el-Arabiyyeli’l-Câmiât, Ebced” which are used in teaching Arabic were evaluated. The most important results of the research are as follow: The list of appropriate morphology terms was reached and divided into four levels according to the education level of the student. In this stage, in parallel with the needs of the student, six morphology concepts in the first level, ten in the second level, twelve in the third level and thirteen in the fourth level are included. It is emphasized that some concepts of morphology that are incompatible with linguistic production such as; Al-I’lal (الإعلال), Al-I’bdal (الإبدال), Al-Idgham (الإدغام), Al-Ism Al-Mazid (الاسم المزيد) are unnecessary. Although these three series contain many concepts of morphology that are compatible with linguistic production, as we have pointed out in this study, some concepts have not been included. For example, the "Al-Lisân” does not includes Name of Time (İsm-i zaman), morphology table and characteristics which are intense (Mübalağa) at/on/in the object (İsm-i Fail). In addition, "Al-Arabiyyeli’l-Jâmiât" did not present the concepts from easy to difficult and from easy to complex. And "Ebced" did not include the concept of permanent adjective (sıfat-ı müşebbehe). The differences between these series and the list are reflected in the distribution of these concepts into four books. In addition, a number of suggestions have been presented for curriculum developers, which may be useful for the use of morphology concepts in Arabic textbooks. 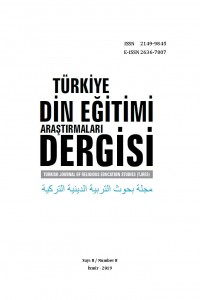