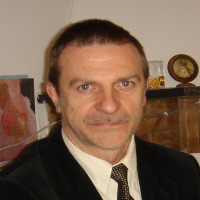 Alexander Pisarchik is Distinguished Researcher at the Center for Biomedical Technology of Universidad Politécnica de Madrid. In 1990 he obtained PhD in Physics and Mathematics from the Institute of Physics of the Belarus Academy of Science and in 1997 he completed special courses on Nonlinear Dynamics in Physiology and Medicine at the McGill University, Montreal, Canada and Time Evolution of Complex Systems in Lisbon, Portugal. In 1992 he won a Belgium grant and worked at the University Libre of Brussels. Between 1993 and 1998 he won several grants from Spanish and Catalonia governments and worked at the University Autonoma of Barcelona. In 1995 we worked at the Iceland State University in Reykjavik. In 1999 he was awarded by the Patrimonial Cathedra of Excellence from the Council for Science and Technology (CONACYT) and since 1999 he worked at the Center for Optical Research in Leon, Mexico. Since 2001 he has been admitted to the System of National Researchers and in 2006 received the highest level (level 3) (equivalent to Full Professor). In 2010-2012 he has been elected member of the Evaluation Commission for the System of National Researchers of CONACYT. In 2013 he has been assigned as Isaac-Peral Chair in Computational System Biology at the Center for Biomedical Technology of the Technical University of Madrid in the frame of the BBVA-UPM BioTech Program of Chairs.

His scientific interests include nonlinear and stochastic dynamics, chaos, synchronization, multistability with applications to lasers, electronics, brain, neurons, and cryptography. He is author of 5 monographs, 18 book chapters, more than 300 articles published in scientific journals, and 13 patents.

He has been honoured with several awards including the First Prize from the Belarus Academy of Science and the Second Prize from the Institute of Physics for his studies on nonlinear dynamics of complex systems.

Chaos Theory and Applications
User doesn't have any peer review duties on DergiPark.
^: The citation statistics shown here are queried from CrossRef. Popular publications listed here, are based on the add-to-favorites statistics of the researchers on DergiPark. Statistics shown on this page are not updated real-time, it takes around 24 hours to be updated with the real values.

: Click to get information about the DergiPark User Badge.