Orhan Pamuk made an important contribution to the recognition of Turkish novel to the world and was considered worthy a Nobel Prize for Literature in 2006. Pamuk has published works that draw attention to both cultural and aesthetic sense with his novels in Turkish literature. The novel A Strangeness in My Mind, published in the last days of 2014, is a work showing the author’s cultural and aesthetic heritage. However, this novel is separated from his previous works in many ways such as subject handled, the way of handling place and heroes lives mentioned. Whereas Pamuk describes the lives of more educated, cultured, Western and bourgeois people in Istanbul, he deals with small lives of ordinary, poor, uneducated and living with a traditional sensitivity, emigrated from village to Istanbul in especially the novel A Strangeness in My Mind. The author describes people migrating from the village to the city in terms of values that seem to disappear in lineclosetosocialrealities. He questionned the family and the family relationship, professions lost their importance, the measures of love and trustiness in a background of the novel in terms of values. In this article, the novel A Strangeness in My Mind will be examined in the context of lost values from moral, social, political, religious, economic, aesthetic, scientific, national and legal. It will be tried to reveal the author’s writing about contrasts between traditional and modern, rural and urban, materialistic and spirituality, good and bad, poor and rich, naive and cunning in lives/matters through lost and degenerated facts. Although A Strangeness in My Mind is a massive and complex work in a structural way, it pays attention with questioning in terms of almost lost values, justice, perpetuating the past and the consciousness of being human.

Orhan Pamuk, A Strangeness in My Mind 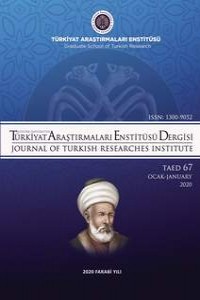