It is important to determine halal solvents as alternative for ethyl alcohol, which is widely used in the preparation of beverage emulsions, flavors and aromas. Citrus flavors are widelyc consumed among soft beverages. In this study, the effects of some halal solvents used as carriers of citrus peel oils in the preparation of orange, mandarin and lemon flavored beverages and their emulsions, were investigated on the final product quality parameters. For this aim, a halal solvent composition, consisting of propylene glycol, benzyl alcohol and triacetin, was used. Some physical and microbiological stability and sensory properties of the samples were examined after storage for 15 days at 40°C and 100 000.00 lux. As microbiological stability parameters, total mesophilic aerobic bacteria and yeast and mold growth did not occur in the samples. Also, some physical stability problems such as ring formation, phase separation and precipitation were not observed. Colour parameters (L*, a* and b* values) were consistent with the characteristics of the products. According to result of sensory analysis conducted with trained panelists, it was observed that the samples had a high level of acceptability and likings, and that the halal solvent sused on the flavor perception intensities had no negative effect. Consequently, it was determined that halal solvents used in the study could be used as aromatic peel oils carrier in citrus flavored beverages. 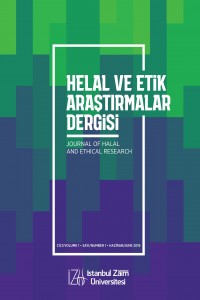