In this study, the presence of Aflatoxin B1(AFB1) and Aflatoxin B2 (AFB2) were investigated in 10 green tea, 10 fennel, 10 rosemary and 10 senna samples from 14 different sales points in Konya Akşehir. (AFB2) was investigated. Analyses were made by HPLC method. While AFB2 was not detected in any of the 40 herbal tea samples, AFB1 was detected in 65,0% (n=26). According to the results of the analysis, the average amounts of AFB1 in green tea, rosemary, fennel and senna samples were found to be 0,0084, 0,0235, 0,0178, 0,0187 ng/g respectively. Although there was no regulation on herbal teas in the Turkish Food Codex Contaminants Regulation, the legal limit for AFB1 in dried fruits in the same regulation was 8 μg/kg, and in spices 5 μg/kg. It was observed that the aflatoxin levels of green tea, rosemary, fennel and senna samples examined in the study did not exceed the legal limits set for fruits and spices. While an average of 0,01085 ng/g AFB1 was detected in unpackaged a level of 0,02651 ng/g was detected in packaged teas. There was no significant difference between tea types in terms of amount (p>0,05). A significant difference was found in the presence of aflatoxin according to how the herbal teas were sold (packaged or unpackaged) (p<0,05). It was determined that the amount of AFB1 was higher in packaged herbal teas. 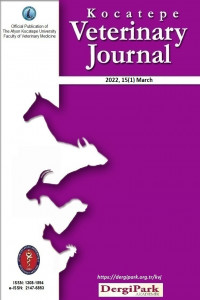