Culinary history has a special place in social historiography. Regarding the history of the kitchen, we can see the sections in the antiquities. Refik Halit Karay can be given an example. Refik Halit Karay known for his literary aspect, “Üç Nesil Üç Hayat” in the work has examined the social structure. Karay’s work covers many topics belong to last years of the Ottoman Empire and first years the Republic of Turkey. Karay devoted each chapter in the book to three main chapters, in which he wrote the essential issues for social historiography. Accordingly, the information about the Ottoman period was evaluated with the reign of Sultan Abdulaziz and Sultan II. The third period was called the “current situation”. Since the book was published in 1943, it can be thought that it was written especially in the forties. In this article, food culture that Karay has covered is discussed and comparisons between the three periods are evaluated. Other sources about the topic have also been used. 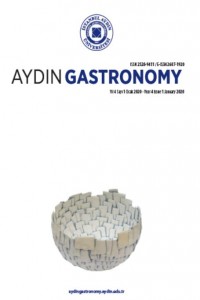