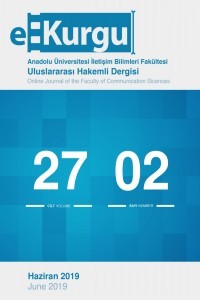 Dear Colleagues, Readers and Respectful Students,
Kurgu is an open access, national and international, peer-reviewed academic journal of communication sciences. The goal of the journal is to provide a platform through which scientific knowledge can spread in the field of social sciences. As such, we welcome both theoretical and applied work in communication sciences. Kurgu will publish in January and June biannually.

The Kurgu journal was initially published in 1979 as the Kurgu Eskişehir Economic and Commercial Sciences Academy Journal of Teaching and Training Through Television. During the first year of publication, the journal was published twice a year, in March and October. The 3rd and 4th issues were published in 1980 and 1981 respectively under the name Kurgu Eskişehir Economic and Commercial Sciences Academy Faculty of Communication Sciences Journal. During the first years of publication, translations of essential sources were prioritized in an attempt to contribute to Turkish literature, resulting in 63 of the 102 articles present in the first four issues being translated articles.

Kurgu was not published for two years after the 12th issue, and the 13th issue arrived in June 1995, and the 14th in April 1996. Yet another two year hiatus was followed by the 15th issue in July 1998, with the journal proceeding with annual publication until the year 2000. The 21st and final print issue of Kurgu was published in July 2005 and was followed by four years without publication. Kurgu resumed activities, publishing annually in 2009 and 2010 as the Kurgu Online International Journal of Communication Studies.

From the first issue, administrative issues caused intermittent publication of Kurgu Anadolu University Faculty of Communication Sciences Journal, yet a total of 523 articles, 66 of which were translations and 26 of which were original works in English have been published. As a peer reviewed journal accepting quality academic and scientific articles in Turkish and English, Kurgu continues its publication life with two issues per year in an online format.

Res. Asst. Çiğdem Ünlü and Res. Asst. Simge Süllü, employees of the journal, conducted an interview with the founding dean of the Faculty of Communication Sciences and the founding father of the Kurgu journal, Prof. Dr. İnal Cem Aşkun, whom had the following to say regarding the publication and functions of Kurgu:

“The Kurgu journal was conceived as the tenth clause of the Policy for the Founding of the Cinema and Television Educational Institution. During the establishment of the faculty, it was considered important that the school had a journal with regular publication containing Turkish publications with teaching and training value for fields such as cinema-television and journalism. At the time, emphasis on Turkish publications was an unavoidable necessity as the foreign language requirements imposed on students were reduced, and translated or copyrighted, Turkish publications were imperative in accelerating the cultural development of fields such as cinema and television, and journalism.

It was also greatly important that a journal was published regularly to engrain the name of the school in the minds of the public, to protect itself and to realize the potential of the nation’s film, television and journalism fields. It was believed that the journal would gain the function of communicating various side projects (competitions, awards, seminars, workshops etc.) conducted by the school with the public. Kurgu was conceptualized as a publication portraying applied works in the industry as well as academic studies in order to develop institutional culture. The Kurgu journal was a journal that not only assisted in academic development, but also contributed to the education of students; it was distributed to both staff and students. Our staff and assistants also saw great importance in the journal. Following the publication of an issue, they prepared for the next issue; thus they put themselves in a cycle of intellectual development.

The Kurgu (Eng-“Editing”) name for the journal emerged during the establishment of the faculty. Kurgu was considered to be an appropriate choice as a Turkish term, representing a concept common to and well known in the fields of journalism and cinema and television. Personally, I had endeavored to translate the basic concepts and terms in the field into Turkish while I was establishing the Faculty of Communication Sciences. Together, with the students and assistants, we strived to translate foreign terms into Turkish. At the time, cinema terminology was either English or French. We at Anadolu University attempted to translate the language of cinema to Turkish. In this regard, Kurgu was very important; it had undertaken the duty of providing an environment in which Turkish concepts in the field were developed.”