The concept of raw food is emerging as a new type of nutrition in the field of gastronomy. The concept of raw eating is defined as the consumption of fruits and vegetables, seeds, nuts, legumes, sprouted grains that can be consumed without cooking. The basis of the concept of raw nutrition is the consumption of foods in their most natural form. Although raw nutrition was first introduced by Max Bircher-Benner in the 1800s, it has been considered as an activist gastronomy trend in the last 30 years. In this context, the aim of the study is to determine the perceptions of the Gastronomy and Culinary Arts doctoral students about the raw nutrition trend, which is an increasingly popular type of nutrition. In the literature on raw nutrition, it has been found that the foods consumed by people who are fed raw and the effects of these foods on the health status of people have been found. In this context, it was tried to determine the perception of people who did not eat raw foods as a result of their knowledge about raw nutrition, in which situations and for how long they plan to apply it. The sample of the study consists of 22 students studying at the Gastronomy and Culinary Arts doctorate program. A semi-structured interview was held with students who voluntarily participated in the study. The obtained data were subjected to content analysis. According to the results of the research, it was determined that the perceptions of the participants about the raw feeding flow were mostly positive. In addition, most of the participants stated that they could choose this type of nutrition if they were given information about raw nutrition. 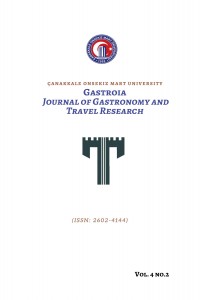