Cold press oil industry generates huge amounts of byproducts rich in proteins, lipids, dietary fibers and antioxidants. In this study, cold pressed fig seed oil byproduct (FSB) was incorporated into bread formulation at different concentrations (0%, 1%, 2.5%, 5% or 7.5%) and its effect on some physicochemical, sensorial, textural and bioactive properties of bread was investigated. Increasing FSB contents resulted in ongoing and significant (P<0.05) decrease in L* levels of both the crust and crumb of the bread while browning index increased. Addition of FSB provided bread dietary fiber up to 0.62% As a result of the study, the total phenolic contents (TPCs) of the crust and interior of the bread enriched with by-products varied from 339.55-532.79 mg gallic acid equivalent (GAE)/g and 125.59-360.72 mg GAE/g, respectively while increasing FSB content resulted in higher (P<0.05) TPC values. DPPH radical scavenging activity was also increased significantly (P<0.05) with the elevating FSB levels values were 348.68-817.04 and 190.04-343.64 mg TE/L in crust and internal bread, respectively. Texture profile analysis showed that addition of 7.5% of FSB caused remarkable increasing effect on the hardness of the bread. Sensorial analysis revealed that breads containing FSB up to 5% were found acceptable. In conclusion, FSB could be used as a functional ingredient for development of nutritive properties of bread without negatively affecting their textural and sensorial properties depending on the concentration. 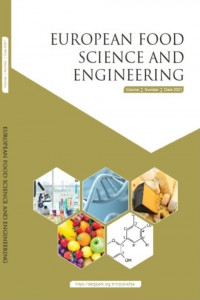