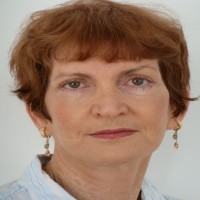 Hanna David
(née: Ehrenstein), PhD, was born in Jaffa in 1952 to a Avraham, who had immigrated to Palestine from Vienna in 1938, right after the Kristallnacht, and Miriam(Klein), Hungarian mother, a survivor of Auschwitz who had been born to Hungarian family living in a Czechoslovakian village. The second in a 4-child family she had insisted on starting nursery school at the age of 13 months, together with her 13-monthsolder brother, and since then showed deep interest in public speaking, making friends and initiating social interactions; somewhat later she started reading and has not stopped since. At age 15 years she became a youth-writer of "MA'ARIV LA'NOAR", the youth edition of the then largest daily Israeli paper. Since the age of 18 she published many Hebrew short stories in various magazines; later she also published a Hebrew novel, a few English short stories, and translations of prose, mainly from German.

Dr. David graduated from the Ultra-Orthodox girls' high-school in Ramat Gan and started her mathematics, physics, Hebrew literature and high-school teaching certificate studies at the Hebrew University in Jerusalem in 1971. In 1975 she received her MA from the Jewish Theological Seminary in New York, and somewhat later gave birth to her three sons. During the years 1976-2004 Dr. David belonged to the academic staff of the Tel Aviv University.
Hanna David received her PhD, "magna cum laude", in educational psychology (minors: didactics of mathematics and education) from Ludwig Maximilians Universität, München in 2003. During the years 2003-2006 she conducted many studies at the Young Persons' Institute for the Promotion of Creativity and Excellence, Tel Aviv (currently:The Erika landau Institute). Since 1995 Dr. David has also been a teacher at a variety of higher education institutions: The Talpiyot Teachers’ College (for religious regular and in-service students); The Givat Washington Teachers’ College, the College of Sakhnin (for Arab students); The Efrata teachers’ college in Jerusalem and the Ben Gurion University.
Dr. David's interest in giftedness started at the age of 11, after her gifted brother was born. While still in high school she became an expert of accelerated teaching for Ultra-Orthodox boys wishing to get high level secular education they were denied of in their schools. Teaching and counseling the gifted became Hanna's recognized expertise in1995, when she taught the course: "the gifted child in the regular classroom" or the first time. Since then she had instructed many hundreds of students in the field of gifted education. In the last 20 years Dr. David has become a well-known counselor for gifted students, with or without disabilities; an expert of gifted education in Israel and abroad, an often invited lecturer in national and international conferences and meetings; an expert-evaluator for the European commission, and a prolific writer of 18 books and well over about 200 scientific papers and book-chapters.

Hanna David contributes two posts every week to her Hebrew blog: "gifted girls, gifted boys and giftedness" [https://www.hebpsy.net/blog.asp?id=65]; she is a certified Pilates instructor and practices Yoga on a regular basis.

FAVORITE
The conditions for establishing a therapeutic alliance between the counselor and the gifted client
Authors: Hanna DAVİD
Published: 2021 , Journal of Gifted Education and Creativity
DOI: -
CITED 0 FAVORITE 0

FAVORITE
Seeking Help for Young Gifted Children with Emotional or Educational Problems: Who Looks for Counseling? Part I: Between the Telephone Call and the Meeting
Authors: Hanna DAVID
Published: 2017 , Journal for the Education of Gifted Young Scientists
DOI: -
CITED 0 FAVORITE 0

FAVORITE
The PISA Results in Mathematics and Science: A comparison between Israel and Turkey
Authors: Hanna DAVID
Published: 2015 , Journal for the Education of Gifted Young Scientists
DOI: -
CITED 0 FAVORITE 0

Journal for the Education of Gifted Young Scientists

Journal of Gifted Education and Creativity
Editorial Board Memberships

Journal for the Education of Gifted Young Scientists

Journal for the Education of Gifted Young Scientists
^: The citation statistics shown here are queried from CrossRef. Popular publications listed here, are based on the add-to-favorites statistics of the researchers on DergiPark. Statistics shown on this page are not updated real-time, it takes around 24 hours to be updated with the real values.