18. Locked-down!: How children’s access and use of urban green spaces and playgrounds changed after COVID 19 outbreak

Adnan Menderes University Faculty of Agriculture Journal is the organ of the Adnan Menderes University Faculty of Agriculture. Most basic and applied research in the field of agricultural sciences (horticulture, plant protection, biosystem engineering, landscape architecture, agricultural economics, agricultural biotechnology, field crops, soil science and plant nutrition, aquaculture engineering, food and milk technology, zootechnics and the like) is a international scientific journal that publishes original studies at the end of peer review. The journal is published every six months and is published in the sixth and twelfth months of the year. However, in some cases special issues may also be published.

The text of the manuscript should be prepared with Times New Roman of 12-point font and 3 cm margins on all sides, justified alignment, double-spaced, and with the page and line number. After the necessary figure arrangements, the manuscript should not exceed 20 pages, including tables and figures (excluding the cover page).

The manuscript should contain a cover page. The cover page must include the title of the article in the language of text, the names of authors (the names must be written in the order to be included in the manuscript, without academic title, without abbreviation, and the initial letters of the names must be uppercase, and following letters must be lowercase, and all of the last names must be uppercase.), the institutions in which each author works, mail address of each author and the corresponding author information must be included (for each author, clearly). It should also include a brief line of information about whether the manuscript is a graduate thesis or not, whether it is a conference proceeding and which institution has supported the research. The information on the cover page should be left justified, each of which should be written in a new line with normal text order. The main text should start on a new page with the title again, and should not contain any other information on the cover page. The whole title should be written with uppercase (but with lowercase in conjunctions such as and, or etc.), being vertical, bold, centered on the page (if any, scientific names should be excluded from this rule and written as required with the author names) and must be appropriate to the text.

4. Similarity Report (file scanned with Ithenticate program etc. and showing that the similarity rate of the article (excluding references) is below 20%)

The manuscript should consist of the following headings;

Title (same as the cover page)

Here are some examples of a literature presentation.

Excessive use of internet link references in the article should be avoided. The internet link references must be produced by prestigious organizations such as Universities, Institutions, other government agencies, extensive organizations, etc. If the authors of these references are known, the author's name should be written, otherwise, you can write "anonymously". Accessed addresses and dates of access from the web pages should be given as "date of access: 01/01/2017".

Chapters from the book:

Only table and figure expressions should be used in the manuscript, and each table and figure must be cited in the manuscript. The font of figure title, contents, and footnote must be 10-points, normal, and left-justified. The smallest font character in the figure must be 8-points. The title should be written in bold on the top of the figure; The first letter of the title should be uppercase, and following letters must be lowercase in normal thickness, the sentence must not be finished by a dot. The line spacing of the figure title and its contents should be 0 pt from the top and bottom. The first lines of the table columns must be bold and the initial of the words should be uppercase. The ½ pt thick line should be drawn to the top and bottom of the first line of the table and the bottom edge of the table.Tables should never be adjusted in the horizontal page structure. Tables that do not fit on the vertical page should be divided and given as two separate tables. While writing the values in the table rows and columns, spaces should never be given at the beginning or end of the values by using the space key. Figure titles should be written as "Figure 1" with 10-point, the initial letter should be uppercase and all other letters should be written in lowercase with normal thickness, and the dot should not be placed at the end of the title. Figure title should be below the figure. The quality of the figures must be suitable for printing (at least 300 dpi); Complicated mathematical equations, complicated chemical structures should be in high-quality vector or bitmap images, etc. 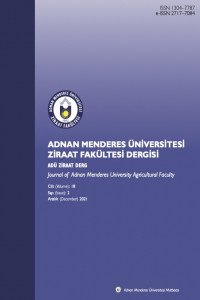